How shinig is gold in India - Part 2 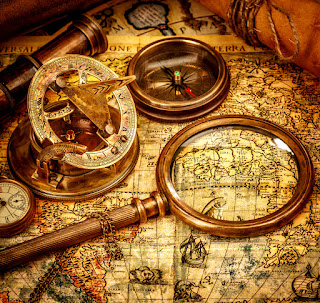 There are thousands of  treasures worldwide; many stories are told about them, they are also likely to be non-existent, but to this date nobody has ever been able to find them. People have been searching for them for so long and probably will continue to search. Some might get found, whilst some might not and might remain as a mystical secret forever. Many in this date  have an unlimited stash of gold; which  they have concealed from the eyes of the world.

A few years ago, locked up inside the cellars of  Sri Padmanabhaswamy Temple (in Kerala) was found vast property, most of which was gold. Gold coins, gold crowns, pots of gold, gold jewelry; all in all lots of gold. The found treasure is said to have worth of a million and twenty thousand crore rupees. Many of the temple's cellars still remains to be opened. Now one can imagine the property and its price that the rest of the cellars hold. 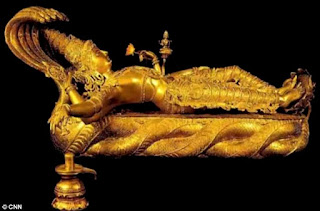 In 2009, a gold crown worth 45 million was offered by a politician in Tirupati Balaji temple. People saw this with their own eyes and so they knew its cost; but the price of those offering that we haven't seen is probably beyond the grasp of our imagination. Every year, hundreds of kg of gold-silver and precious diamonds enters the temple as an offering. In 2010, Tirupati Trust submitted 1,075 kg of gold in SBI. In 2010, the gold offering this temple got from just the VIP's that came here, was around 21 lakh Rs. In 2009, 500 kg of gold was submitted in Overseas Bank by this temple. In 2004 8 thousand kg gold could not be melted only because of the stones carved in it; back then its costs had been estimated 1 thousand 680 thousand million rupees. According to reliable sources, every year in this temple, 1,825 kg of gold and 800 kg silver offerings comes in. In 2007, when Vellore Sirpuram temple was constructed, 10,500 kg of gold was used into it, the estimated value of it was 325 million rupees. In 2011, 17 ton silver was found is a famous temple in Orissa, its total worth was 117 million rupees. After the death of SatyaSae Baba, when the rooms of his ashram were opened, gold worth more than millions was found.

When a temple is offered so much gold, they do not understand what to do with it; they either submit it in the bank or paint it on the walls of the temple. Those who give such offerings clearly have no shortage of money, but do they really not care what the temple would do these offerings? The black money that people are not able to consume turns into “Offerings” that they give in those temples. The temple is considered the most sacred site, but there is more black money here in form of offerings than the one stashed in Swiss Bank. In December 2010, Andhra Pradesh High Court ordered that it is useless to use silver and gold on the temple walls. Gold plate on the temples is totally rude. The offerings to the temples should not be considered as donation but a gift, because God is the creator of this world. God is almighty. Who can dare to donate something to the creator? There is a custom of exchanging gifts;  so here we need to understand that if a person possess so much property to make such huge donations, then what does this person wants in return for this offering.  You could also say that many times people pour heavy offerings after the completion of a votive; does one person only ever has one votive in his whole life? From ancient times people have believed that if one desires for strength, prosperity and happiness, then they should God offer God gold-silver parasol, jewels, throne, flute, garlands and crowns etc.

Despite being very important for life, other metals have no position in front of gold. Poet Raheem has compared the desire of gold with the intoxication of Dhatura.

Now you must have understood why we became the Golden bird. This country have always been the country of Kings and Queens; who had always wanted to expand their wealth and treasures along with their states, and because of which gold had always been all over Hindustan. We can say that we have inherited this gold addiction and are used to it.
Posted by Manisha Sharma at 09:12