Ban should be Banned

I'm very attracted to the word, Ban. If it is said not to do something then an itch starts to build up, asking why not? Especially if the government applies a ban then the desire, the curiosity to see and understand what they are hiding, or when a so called social institutions raises a commotion on a film star’s film then the first thing I do is explore the YouTube to see what it’s all about.

Girls should not see blue film; the word ban showed that too and made realize that it was nothing but a curiosity that starts from one age and ends at one, the curiosity of sex, that’s what was supposed to be hidden behind the ban. There is a ban on being a non-vegetarian; this makes sense to me as to why should I be eating a killed or an already dead creature. Should not travel alone; traveled alone a lot, it did not matter. Not to get into a fight; did that too time from time, I got hurt more than the other person but it was hell lot of fun. Should not drink alcohol or smoke cigarettes; oh my god, it smells and tastes terrible! I got to know that after I tasted them. I did all this from my own free will, and understood what’s wrong for me and what’s not. 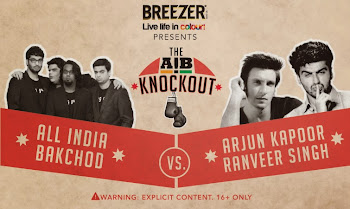 Recently when government was thinking about banning the documentary India's Daughter, first thing that was done was to download it from the YouTube, but could not understand what the fuss was about. It had nothing in it that could damage the image of our government or our country. Then one more ban was up on the AIB Knockout. Yes, abusing and foul language was used but they used it for each other and the people who were sitting there. It was their stamina and will of the 15 thousand audiences that were sitting there. I've seen the video; it was my own free will. I was not stopped by anyone and neither was forced to see it on a gunpoint.

Why, why do you force it up on us? You neither explain it to us nor do you allow us to understand it from our own free will; you just hand out a dictatorial order. You do not understand that only a revolt is caused from dictatorship, and that’s not acceptable to you either. Everyone have their own likes and dislikes, everyone have their own conscious sphere. Let people decide themselves. According to you, we are sensible enough to be giving our valuable vote to decide which government we want for this vast country; we can get married at the age of 18/21, because we can understand and can run the relation; we get the driving license at the age of 18 because we get the value of our lives and the lives of others; so please let us understand things from our own understanding.

I believe, the word ban itself should be banned.